The clinic offers general primary and preventative care services for men, woman and children; as well as general (and some advanced) dentistry services.  The clinics mission is to deliver comprehensive, culturally competent high-quality healthcare, with state-of-the-art equipment and compassionate practitioners to Covilli’s 700+ farmworkers, their families and surrounding rural communities. 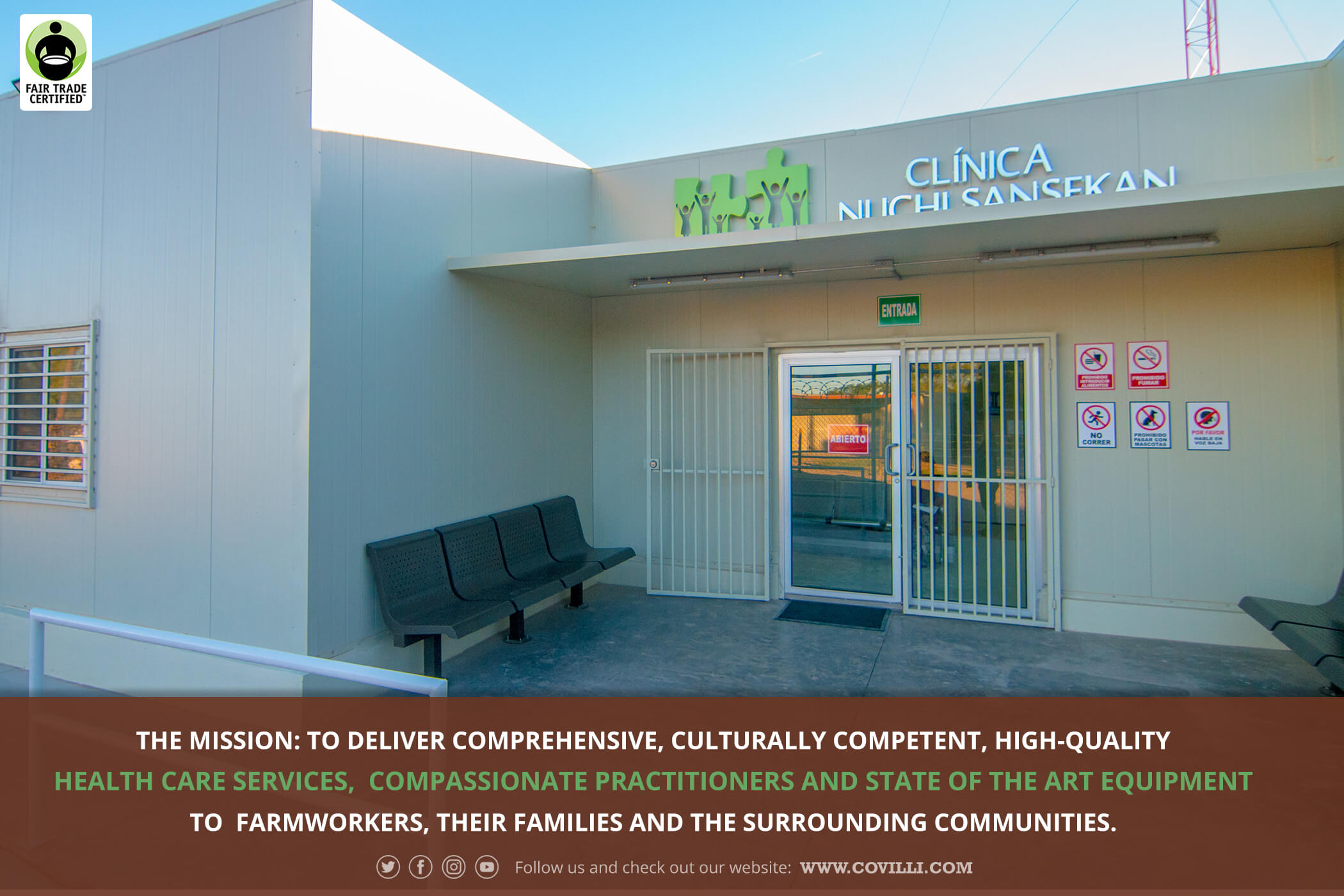 Covilli President Alex Madrigal initiated the weekend-long ceremony over dinner on Friday January 11th, with a presentation on the evolution of Covilli and the history of Covilli’s venture into fair-trade. He emphasized to the crowd that the “fair-trade” concept had been working its magic at Covilli, even before there was a name and certification for it. Enunciating that the fair-trade certification process has advanced the original agenda put forth by the founders in 1992. Noting that Fair Trade certification has further expanded, improved and authenticated this agenda with a system of accountability and tractability, all sustained by standards and oversight.

Iris Montaño Madrigal, Director of Marketing, gave the audience a lesson on fair-trade and what it means for Covilli. The predominant focus of fair-trade is on the wellbeing of the farmworker.  The gathering witnessed, first-hand (in video form), how Fair Trade Certified™ Premium Dollars end up in community development projects, while also learning the basics of what Fair Trade certification means under Fair Trade USA.

Nuchi Sansekan’s Fair Trade Committee was present to substantiate the tremendous amount of work that the entire group has undertaken in the first three years since Fair Trade certification in 2015.

José Miguel Ayala Quiles, Farm Director for Agricola Ciari (Covilli’s farm) gave a heartfelt and transparent presentation on the challenges (hint- there are many) that come with fair-trade certification and the difficulties that continually arise in the process of evolving deeper into ethical farming systems.

The night concluded with an active Q & A session between the gathered audience and the Nuchi Sansekan Association’s Fair Trade President, Maricela Lopez, after she spoke eloquently about the cultural shift she has witnessed in the last three years to the perceived benefit of fair-trade to farmworkers, including herself.

Saturday began with an tour of Covilli’s farm, Agricola Ciari and educational glimpse into their extensive regenerative farming practices and ended with the official inauguration of the health clinic, including a full tour of the facilities and a Q & A session with the clinics General MD, Loreto Vazquez Acosta; the Dental Surgeon, Ruben Esteban Espindola Ortiz; and Nurse Practitioner  Andrea Machado Roja as well as  the Fair Trade Project Manager and Fair Trade Committee Assistant , Ricardo Cebreros Cardona.

One moment in the clinic  Q & A session that stuck out was when our General Dentist/Dental Surgeon Ruben Esteban Espindola Ortiz spoke of the state-of-the-art equipment that the clinic acquired and utilized.  Dr. Ortiz practiced in Mexico City prior and expressed that he had never worked in a dental office that was so well equipped with such quality materials and instruments. He furthered that this was one of the reasons he decided to move to the incredibly rural town with very few residents. Joining a team where the goal is to offer holistic preventative care: having the time to explain to each patient the nuances of their diagnosis, the details of their treatment, the options and the preventative measures and with the best equipment possible was what brought him and the others to the clinic.  To hear the Dr. express this very sentiment was powerful for the stakeholders.

The weekend concluded with a relaxed dinner that had  all stakeholders intermingling and sharing their thoughts and experiences with fair-trade, farmworkers, organics, regenerative farming and Mexico.  All reiterated one pivotal sentiment, that every purchase matters and positive impact happens when the entire system works together. Nuchi Sansekan….

Check out the Flickr album filled with photos of the clinic, the inauguration and the excitement for Fair-trade!